MasterChef and the chocolate challenge 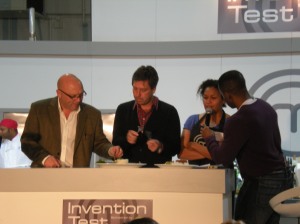 Divine was the chocolate of choice at MasterChef LIVE at the Invention Test at London’s Olympia last weekend so we just had to go along and take a look. Fans of BBCs MasterChef will know the Invention Test only too well. Contestants are presented with a tray of ingredients and given 30 minutes to create a tempting dish to impress the stars including Terry Wogan, Nadia Sawalha and Andi Peters – all in front of a live audience! One of the chosen ingredients was our 70% Dark Chocolate which is great in cooking because of its rich, intense flavour. The best three dishes were judged by MasterChef presenters John Torode and Gregg Wallace who were a lot of fun on stage. The contestants created some ambitious dishes, one contestant created a prawn risotto in the half an hour time limit which I thought was pretty impressive. 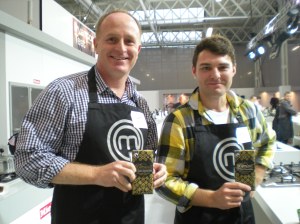 The chocolate was used in lots of creative ways, savoury dishes, sauces and of course in desserts and puddings. The whole event looked pretty nerve racking, I know I wouldn’t have wanted to be up there. Andi Peters was telling us that your mind just goes blank when you see the ingredients. There were some disasters, some burnt apricots with pork and some over cooked rice in another but it all looked great fun. I said hello to the lovely Gregg Wallace at the end who is one of our favourite TV stars and who is partial to a piece of Divine.