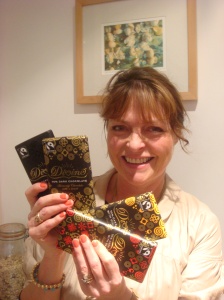 The lovely Janet Ellis, one of the best known presenters of the iconic Blue Peter programme on BBC, and regular contributor to radio and TV (most recently Celebrity Come Dine with Me), is a big lover of Divine…

“To eat Divine is a daily treat, to remember its provenance is a continual inspiration.”

Find out who else is loving Divine here

What was so nice about Fairtrade Fortnight

Fairtrade Fortnight is the most full-on and extraordinary two weeks of our year (not to mention all the time planning it) and we, and the farmers, meet more fantastic people in 14 days than one would hope to in a whole year. It’s exhausting – but amazing.  (And big thanks to Tal for co-ordinating the whole thing)

Catching up with some sleep on the train to Oxford

While the wonderful events and brilliant audiences are what we hope and aim for – it can be some of the small things that create some of the best memories.  Here are some of mine….

Harriet and Fatima learned to say “Fabulous”, “Marvellous” and “Outstanding!” while they were on this trip – for example when they really mastered going up and down on the escalators – Harriet announced they were “Outstanding!!”

It was some of the people we just bumped into by chance that gave us a real feelgood experience – like the ticket man at London Bridge tube who was really interested in who the farmers were and why they were here, and said how many of his friends were Ghanaian and how great he thought Fairtrade was.  And Giles the sound engineer at BBC who connected the interview down the line with “Costing the Earth” – who confessed he was an enormous Divine fan.  And the Hungarian girl working in the Bermondsey Street Teapod who was amazed to be introduced to two of the cocoa farmers behind Divine – “it’s my absolutely favourite chocolate,” she cried, “and I should know, I have tried them all!”.  (Nice to be able to tell her you can now buy Divine in Hungary).

Meeting up with other producers is always special too – Harriet and Fatima were introduced to Dyborn from Malawi (where the nuts for Harry’s Nuts come from) – and there’s an instant affinity between fellow Africans and fellow farmers.

And finally – on our last afternoon together (returning from a mega shopping session in town) – great excitement behind me and lots of pointing.  They had spotted a squirrel and their immediate response was to ask if we could kill it for bush meat.  I had to concur about the frequent desire to kill squirrels (from a gardener point of view) but not so sure about the bush meat part of it…. we left him to cause more havoc in South East London.

On Saturday I met Jennipher Wettaka at the Labour movement’s International Women’s Day Celebration in Westminster.  She is vice Chair of Gumutindo the co-operative of coffee growers in Eastern Uganda that supply Equal Exchange .

Her smile was like a ray of sunshine as she described how women do most of the work and the men do not appreciate them, but that since their co-op has been successful the men have been much more interested! This filled the room with peels of laughter, an experience shared.  She was delighted to be here as an ambassador for her co-op and was looking forward to returning to Uganda to tell the women in the other villages of her experience.   She ended by plugging her coffee, thanking her friends at Equal Exchange.  Long Live Equal Exchange, Long Live Fairtrade, Long Live International Women’s Day.

Fairtrade and Women and Pancakes

Fatima and Harriet in their Kuapa dresses at Oxford Town Hall

In Oxford today – this morning as guests of Mid-Counties Co-op at their Fairtrade Fair in the gloriously ornate Oxford Town Hall. After a Fairtrade fashion parade featuring models from 6 months to 60, and their first taste of pancakes, Kuapa farmers Harriet and Fatima presented their experience of farming and Fairtrade. There were lots of questions, photos, and then African drummers from Guinea (via Stourport). 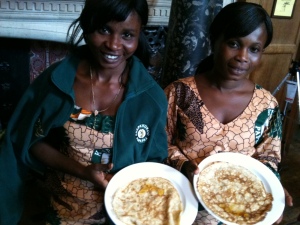 In the afternoon we jumped into a cab up to Oxfam GB (divine’s long time supporter and customer) to join their celebration of International Women’s Day. They were involving the staff in a day of talks and displays about gender issues worldwide (Oxfam is one of the NGOs contributing to the EQUALs compaign). Harriet and Fatima drew a big crowd, standing room only. This time they both gave much more personal stories about how membership of their co-operative had empowered them. They have achieved such great things and are inspiring role models for other young women in their communities. They were asked if there was any male backlash (sometimes men are jealous they say), about the size of their farms and cocoa prices. Later they were off to dinner with the buyers for all the Oxfam shops.

Fatima and Harriet at Oxfam GB

Fatima and Harriet, continuing their tour as ambassadors for Kuapa Kokoo and Divine Chocolate, joined up with PeaceJam in Bradford, and met Betty Williams a co-recipient of the Nobel Peace Prize and Chino, a fairtrade blueberries producer from Chile.

While Harriet and Fatima have set off North to Liverpool – their Kuapa colleagues Stephen and Isaac have arrived in Dublin (after a rather unexpectedly long journey from Kumasi in Ghana).  First stop the Sugar Club, hosted by Fairtrade Ireland and our own Divine David Greenwood-Haigh.

Kuapa farmers Isaac and Stephen outside the Sugar Club in Dublin

Celebrating Fairtrade along the Meridian

Sophi reports from the first event in Greenwich:

Harriet & Fatima, fresh from the rainforest in the Western Region of Ghana, braved the freezing British winter to launch of Fairtrade Fortnight 2011 in Greenwich.  Greenwich became a Fairtrade Town in 2006.  (And by the way Ghana is also on the zero meridian and Greenwich is Twinned with Tema in Ghana.) Cllr John Fahy and Cllr Jim Gillman the Deputy Mayor of Greenwich welcomed everyone to the newly refurbished Eltham Centre and congratulated everyone for the success of Fairtrade, the market is now worth more £1.17 billion in the UK and is benefiting millions of poor farmers around the world.

Chris from Cards for Africa  spoke and showed a little film showing how buying a beautiful greetings card can support dignified jobs for young people in Rwanda who have been orphaned by the war.

I introduced Harriet and Fatima and congratulated Greenwich on being a Fairtrade Town. I’m really proud London has achieved Fairtrade Status and is the largest Fairtrade City in the world.  I hope Greenwich will help us achieve our ambition of delivering the First Fairtrade Olympics.

Harriet and Fatima described their experience as farmers – how they cultivate, harvest, ferment and dry the cocoa beans that go into Divine and how they have benefited from the additional premiums they earn from Fairtrade sales.  They showed bonny pictures of children in schools they have built and people enjoying clean water from wells that have been sunk.  Kuapa’s commitment to gender empowerment has been made real by the presence of these two confident young women. They never could have imagined that they would be representing their co-operative , a successful business trading 30,000 tonnes of cocoa with a turnover more then $50 million last year.