I met up with Sara from Dubble Fairtrade Chocolate for the ‘Put People First’ march and rally in central London on Saturday 28th March.

Put People First is a coalition of 150 organisations, including Trading Visions, that have come together ahead of the G20 summit in London this week, calling on G20 leaders to create jobs, tackle poverty and inequality, and take urgent action on climate change. The coalition’s agenda spans the rich and the poor world: it’s about jobs and poverty in the UK as well as about global inequities.

The police estimated a pretty big turn out of 35,000 people, and while it wasn’t the largest march I’ve been on in recent years, it was one of the most diverse and colourful. The coalition is a broad alliance of trade unions, green groups, faith organisations and development NGOs. The diversity of the marchers reflected this: there were all kinds of different outfits and banners there.

I remember seeing a few students from the Plymouth Palestinian Solidarity Campaign waving a huge Palestinian flag; the big group of marchers from the global e-campaigning group Avaaz all wearing green hard hats symbolising the call for green jobs; groups from every single union, many of them marching with large beautifully embroidered banners, including really specific ones like the Bradford Casino Workers Union; the colourful Four Horsemen of the Apocalypse from G20 Meltdown; a lovely group of women near Embankment tube singing Bread and Roses (“Hearts starve as well as bodies; give us bread, but give us roses!”). 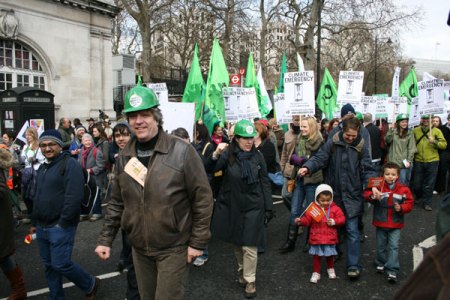 We joined the fair trade contingent with the Fairtrade Foundation and Fairtrade London, all dressed in bright yellow as the ‘Bananas for Justice’! There were also lots of marchers from Traidcraft. Our marching chant? “Free trade, boo. Fairtrade, woo!” 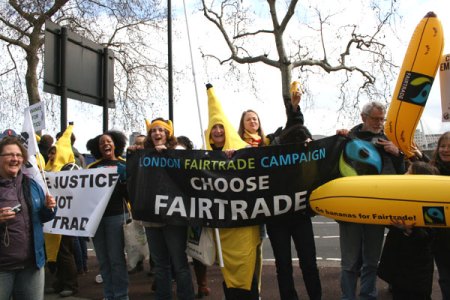 The weather was a strange mix. After a blustery, sunny morning we were pelted with bouts of sudden heavy rain and hail as we huddled companionably together in Hyde Park for the rally. Quite ironic for a climate change demonstration! There were some great speakers: the most exciting was probably Mark Thomas who came on with an angry impassioned attack on unfettered free market capitalism. 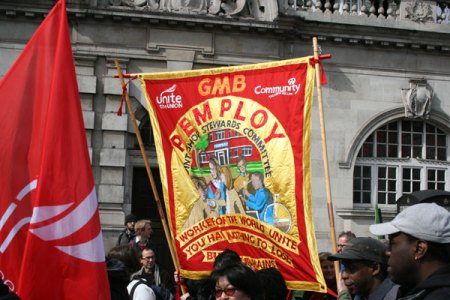 It was a great day overall: now I hope that it makes an impact on the G20 leaders and strengthens our collective resolve to keep campaigning for a better global economic system that works for people and the planet.

I was one of the speakers at the SEL Stepping it up Marketing conference this week. It was a great opportunity to hear some inspiring entrepreneurs talking about their businesses, and sharing their learning.  Sam Conniff of Livity the creative consultancy working with young people, for young people, and Carmel McConnell of Magic Breakfast, delivering free nutritious breakfasts to primary schoolchildren in greatest need, particularly stood out.  Both organisations are born of innovative ideas and brilliantly executed.  What really emerged from the day – which was extremely well attended – was that like any business, social enterprises need fantastic ideas, great services and products, and innovative management and communications to succeed.  Just as Fairtrade products can’t just rely on the Fairtrade Mark to set them apart, just saying you’re a social enterprise is not enough.  Some businesses, like La Fageda one of the leading yogurt brands in Spain, don’t mention they are a social enterprise up front at all. For those that love the brand – it’s a bonus to discover that it employs a large percentage of handicapped people. The ideal is to create a ‘unique selling proposition’ which combines the social mission of the business, and the excellence of its product or service…. a bit like Divine’s ‘Heavenly Chocolate with a Heart’. For more discussion on marketing issues for social businesses try Rob Greenland’s blog The Social Business. Posted by Charlotte

…..but its even better when it is made with Fairtrade ingredients!

I  visited the University of Birmingham to give a chocolate workshop to the students and staff begining with a brief history of chocolate (including how many cups Casanova was reputed to drink every day to maintain his health!), explained how the Kuapa Kokoo cocoa farmers’ cooperative operates and how the Divine Chocolate company has become so successful in such a short time. They were amazed to learn that there are only 16 employees in the company which is co-owned by the farmers themselves who get to share in the profits.

I then explained what ingredients go into a Divine bar and how the quality of the ingredients enhances the final product. Then the students and staff got to everyone’s favourite bit – chocolate tasting – though they were first shown how to appreciate the quality by listening to the ‘snap’ as the bar is broken; looking at the shininess; smelling the chocolate then finally placing it on the front of our tongues where the best taste receptors are –  then they got to enjoy it!

Retrospective on the farmers’ tour

At the end of the tour we all got together at Divine so that the rest of the office could meet the farmers – hear their stories and what they had made of their tour round UK.  What they have repeated througout the tour is that “if it weren’t for Divine, they wouldn’t be here” and that it has been an extraordinary experience to be here.  It’s a revelation to see how much chocolate we eat here and it made them very proud to see people enjoying Divine Chocolate and see it stocked in so many shops.  We asked them what had struck them most while they were here.  Both James and Anane had been really impressed by our schools here (they visited a lot of them!).  How organised, disciplined, well-resourced they are. How good the teachers are.  Education for their own children has been so important to them.  James also then said “One thing I am going to say when I get back to my society is this. People should not be selling their homes and giving up their cocoa farms to come here to UK – it is not easy for people when they come over here, and they shouldn’t give up on what they have in Ghana.”

The thought that in 12 hours time they would be stepping out into the heat on the Accra airport tarmac brought big smiles to their faces.  “Soon I will see my wife!” beamed James.  They were both planning to gather all their villages together to give them the full low-down on what they had done, seen and heard while they were here. Posted by Charlotte

Divine has always avidly followed Ghana’s fortunes in world football. Remember the Ghana vs Brazil match in the second round of the 2006 World Cup.

Yesterday we learnt that,  in addition to the ‘Black Stars’, Divine can also support Ghanaians on the ski slopes! Cool running indeed!

Check out the BBC’s feature on a Ghanaian Snow Leopard…. 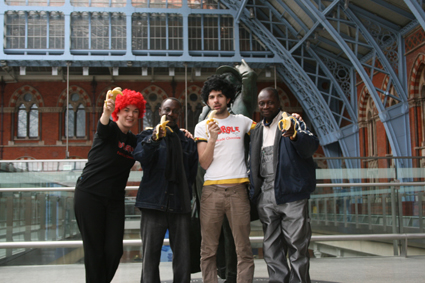 Dubble with Anane and James from Kuapa Kokoo 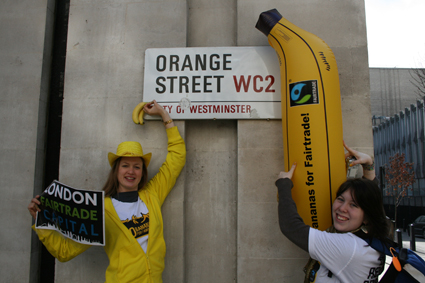 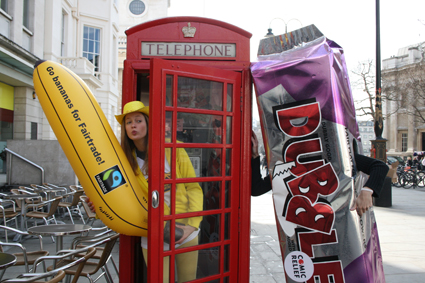 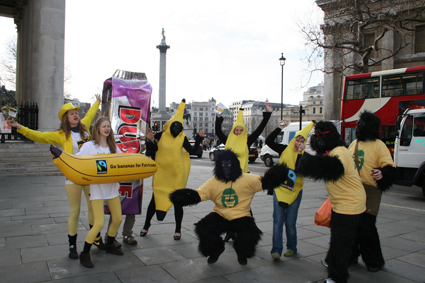 Dubble, Divine and the Fairtrade Bananas 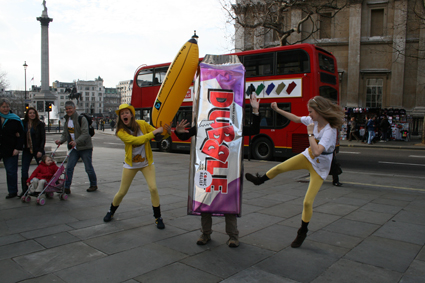 Thousands of people went bananas for Fairtrade by eating a Fairtrade banana between noon on 6 and noon on 7 March, as part of the world’s biggest banana-eating event! Divine and Dubble have been on a banana munchathon and caught up with the banana possee and the London Fairtrade Campaign at Tower Bridge, Kings Cross Station and the finale at Trafalgar Square on Saturday.
387,272 people signed up to eat bananas beating the world record!

Up at the crack of dawn this morning for a long drive with David and the farmers down to Lincoln, well, first to a lodge in a place with the charming name of Norton Disney. James and I had our customary bowl of Premier Inn porridge, Anane doesn’t eat before 9am so he just had coffee, then off we went.

At Norton Lodge, we took part in a well attended schools workshop, organised by the Lincolnshire Co-operative, who are very active in all kinds of things in this area. The workshop was focused on co-ops and Fairtrade, and Anane and James rose to the occasion, describing clearly the benefits of co-operative working in the course of their cocoa farming activities in Kuapa Kokoo.

Next we took part in the Go Bananas Fairtrade Foundation action: 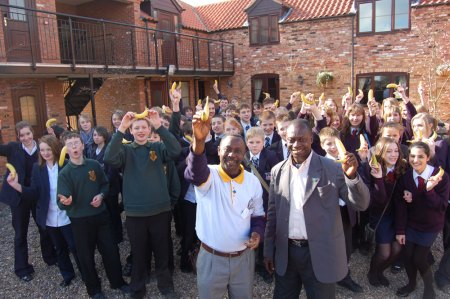 We were served a very traditional English roast beef lunch, followed by jam roly poly and custard. Then off to Lincoln to be shown the glorious cathedral, a romanesque gothic masterpiece of substantial proportions. It’s completely flat countryside around Lincoln, but the city itself is built on a hill, with the cathedral on the very top, plainly visible for miles and miles around the city, not so much towering over it as sitting comfortably above it.

Then to Lincoln City Football Club stadium, for more presentations and a chocolate ganache making workshop from David. The combination of James and Anane’s cocoa and Fairtrade presentation with David’s more light hearted chocolate banter made for a very enjoyable afternoon for everyone who attended. We also worked in the Fairtrade Foundation’s Go Bananas action by dipping bananas in the chocolate ganache!
We were lucky enough to be given a guided tour around the stadium by the football fanatic venue manager, Wayne Banks. We also had dinner in one of the hospitality boxes overlooking the stadium. It was a lovely little room for dinner, with a great view: the empty stadium stretched out in front of us, and Lincoln Cathedral rising up behind it.

Divine Delights
Create a free website or blog at WordPress.com.